13 normal hearing subjects aged between 18 and 30 years participated in the hearing threshold measurements. The sound signals were generated by a specially developed sound source system (see Fig. 1, described in the previous newsletter of July 2017) and were presented to the subjects through eartips. 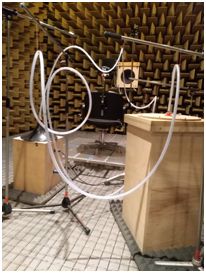