Vestibular responses to low-frequency and infrasound

The ability of airborne infrasound to elicit responses from the vestibular system was studied. It is often rumoured that this non-auditory pathway is particularly sensitive to acoustic infrasound stimulation on the grounds that it best responds to vibration < 10 Hz (e.g. Schomer et al., 2015). For fifteen subjects, vestibular evoked myogenic responses (VEMPs) were recorded using different types of acoustic stimulation. VEMPs are a standard clinical tool for vestibular diagnostic, recorded in response to very short 500-Hz tone pips from the sternocleidomastoid neck muscle. In addition to this clinically used stimulus (our control for normal vestibular function), we recorded the myogenic frequency-following response (FFR) to 40-Hz amplitude modulated 500-Hz tones (reported previously by Bell et al., 2010), and also 40 Hz, 16 Hz and 4 Hz pure tones. The first two kinds of stimuli were presented at 119dB SPL and 116.5dB SPL (peak)), respectively, using TDH-50P headphones, while the pure tone stimuli were presented at 90 phon with in-ear sound source that was especially designed during the Ears 1 project for acoustic stimulation between 2 Hz and 250 Hz. FFR responses were recorded to 120 sec continues stimulation. A typical FFR spectrum to 40 Hz tone stimulation is shown in figure 1.

Figure 2 shows a summary of the results, given as the percentage of significant responses (as determined by phase coherence) obtained for each stimulus type. Despite that most of the 30 ears produced a response to the 500 Hz stimuli, only 16.7% showed significant VEMP responses to the 40-Hz tonal stimulation; this decreased to 10% for 16 Hz, and no response at all to 4-Hz infrasound.

Although the vestibular organ is tuned to very low frequencies of vibration (Todd et al, 2008), these findings suggest that activation of vestibular responses by airborne sound decreases with decreasing frequency. It should be noted, however, firstly that current results were obtained for a group of healthy subjects, and may not apply to persons affected by vestibular pathologies, or people that tend to complain about environmental infrasound. Secondly, measurements involved vestibular responses recorded from the sternocleidomastoid muscle (cVEMPs), which are believed to test the organs of the saccule, whereas VEMPs recorded from the extraocular muscles (oVEMPs), which test for utricular responses, were not systematically measured. However, informal pilot data suggested that these required even higher acoustic stimulation, and were completely absent to tonal stimulation at 40 Hz and below. In summary, at least for saccular testing in healthy subjects, results suggest infrasound well below 90 phon does not evoke a vestibular response. 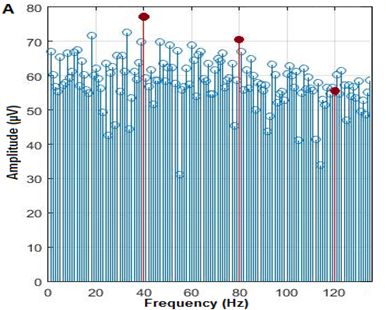 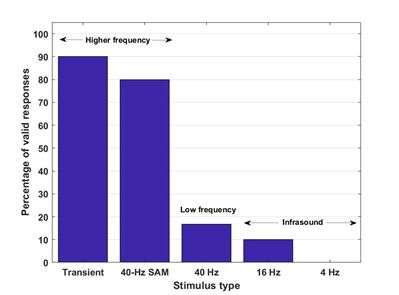