Since the project focuses on the hearing sense when researching the mechanisms of airborne infrasound (IS) and ultrasound (US) perception, sources are required which will supply the sound directly into the ear canal, i. e., insert earphones. The sound is conducted via tubes terminated by audiometric eartips. Owing to the targeted high sound pressure levels (SPL) for IS and US, the sources must operate most linearly (avoiding signal distortions) so as not to generate unwanted frequencies inside the conventional audio sound (AS) frequency range. IS must not contain harmonics (multiple of fundamental frequency), US must not contain subharmonics (partials of fundamental frequency).

Sources for investigations into the perception of IS accompanied by AS must also be able to generate the sum of the stimuli in a way preventing [avoiding] the generation of unwanted modulation frequencies. Modulation frequencies do arise when the IS loudspeaker exerts its sound pressure on the AS loudspeaker membrane via the necessary conjuncion of the sound tubes. The high-level IS then modulates the AS, as shown in the Figure 2 spectrum (blue curve), generating modulation tones that become perceptable once their level difference to the AS tone becomes smaller than a certain limit (e. g., 40 dB for 1 kHz.

To prevent that impact, the AS source was equipped with an additional loudspeaker that delivers the IS signal to the back of the AS loudspeaker membrane, compensating the IS loudspeaker's influence. As shown in Fig. 1 (red curve), the Modulation tones are reduced by more than 15 dB, making the effect imperceptible.

Figure 1: Blue: Sound pressure spectrum of the perceptible modulation of a 1 kHz tone, 70 dB SPL, by an IS tone of 4 Hz, 124 dB SPL; Red: Reduced magnitude at 996 Hz and 1004 Hz, shifting the modulation below perception threshold.

For the generation of pure-tone US up to 40 kHz, which was also to be fed into a sound conducting tube with ear tip, it came out after pre-tests with small piezo loudspeakers, that only the usage of several loudspeakers in unison could yield sufficiently high SPLs for threshold and brain response measurements in both MEG and MRI studies. Figure 2 shows the chosen geometrical lay-out.

This source is able to yield up to 130 dB SPL with sufficiently low signal distortion. 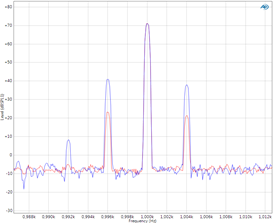 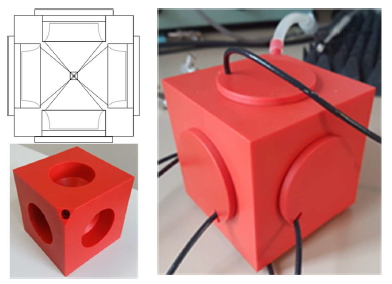